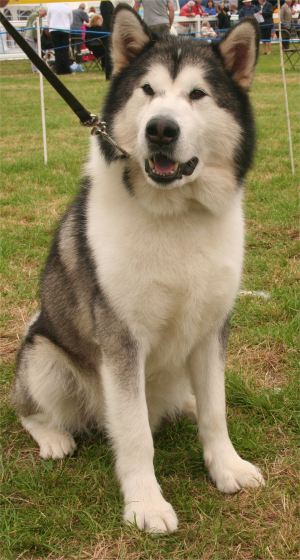 I have had dogs all my life, but it wasn’t until I saw my first Alaskan Malamute in 1994, that I knew that this was the breed for me.
I contacted Jill and Jim Broadberry of the Hyteton Kennels in the 1994 and was put on their puppy list. Our first Mal - Hyteton Kooper (litter brother to the famous Hyteton Kicass) came to live with us in March 95.

Angus - Hyteton Tu Ture for You followed Kooper – a long coated Mal who taught me more about Mals than I could have ever hoped to imagine. Sadly, Angus left us August 08 nearly 13 years old – gone but certainly not forgotten.

As I wanted to have a go at showing and with Angus being a long coat Malamute that can’t be shown, I went back to Jill and Jim for a show puppy.

Thank you Jill and Jim for giving me such a wonderful boy.

Together, we have learned so much about the showing world and have met and made many new friends.

Galen has had a good showing career, winning Best Junior at the Alaskan Malamute Club of the United Kingdom Club Show in May 2003 awarded by specialist judge Barbara Stainer and numerous BOB awards at Open Shows as well as many placings at Championship Shows. Galen has qualified for Crufts almost every year and 2010 will not be an exception. He has also achieved his WPD title, which he enjoyed doing even though he was 8 1/2 years old when he completed it. He retired from the show ring in 2010.

In 2007, after finishing my studies I felt I had more time to have another Malamute and that is when Sledog Forest Trail for Cherubini – Ziva came to live with me. Thank you Nicola and Stuart for letting this wonderful girl come to live with me.

Ziva has been such an easy Mal to train – she has achieved the Kennel Club Good Citizen Gold Award - proving she has brains as well as beauty.

She has also achieved her WPD title. She is also doing very well in the show ring, being placed in many big classes at Championship Shows and has qualified for Crufts in 2009, 2010 & 2012. In 2011 she gained her stud book number allowing her to qualify for Crufts for life.

Troya is working towards her Kennel Club Good Citizen Gold Award and is doing well in the show ring and has qualified for Crufts in 2013.

Phoenix arrived in Dec 2011 and has settled into the Cherubini Pack very well. She is doing very well in the show ring and has qualified for Crufts in 2013. Thank you to Kay and John Botterill for this special girl.